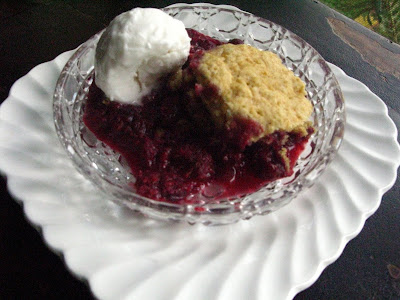 I was so surprised and happy when the Port Townsend Library chose The Northwest Vegetarian Cookbook for their featured book at their annual dessert auction next Wednesday, November 17th at 7pm. I have loved libraries forever. Well, ever since Nancy Drew became my hero when I was young. I checked-out every mystery the library had back then, and it's the still one of my first choices for books, magazines and information today. And beautiful vintage libraries like The Port Townsend Library are so cool they should be tourist destinations..

At the risk of sounding like a hick, I've never heard of a dessert auction. Also I was curious when Cris Wilson said they didn't have a stove or kitchen for the event. Where would I'd be doing the demo? I like to picture things before an event, but most of the time for cooking demos or classes, there's no way around it, I have to show up early and get a picture in my head for a presentation. No stove. It certainly reduced the possibilities, so I picked Cranberry-Raspberry Slump.

A slump is just about as old-fashioned as you can get. Fruit (usually berries), simmer with sweet dumplings steaming on top. A slump also doesn't need a burner if you have an electric skillet which is exactly what I need if the event doesn't provide a stove. Just mix the batter and drop dumplings onto simmering fruit and cover. The secret is in the ingredients. That's the general story with local food.

A Cranberry-Raspberry Slump was also my first choice because cranberries are simply meant to be paired with raspberries. The first time I combined these two characters, I immediately knew that all they needed was orange juice, a little Grand Marnier, and orange zest.

As for the word "slump," I'd like to give the person who named this dessert a word or two about recipe names. It's too late now, but to me, slump sounds like peasant food. At least it's better than a grunt, which is the same thing from another region. But forget the name for a minute and consider this: a slump is Nigella Lawson easy to make. And if more people suddenly showed up for dinner, double the amount of fruit and sweetener, and it still works. As for the dough-- if you have access to freshly ground local flour, please use it because it really makes a huge difference in flavor.

The best part about this recipe is that I must test and retest this recipe before the event--just to make sure it works, of course. You never know. So for the first version, I wanted those berries simmering and daylight was fading, so I gathered the ingredients quickly. Natural light poses such photo dilemmas in fall and winter. 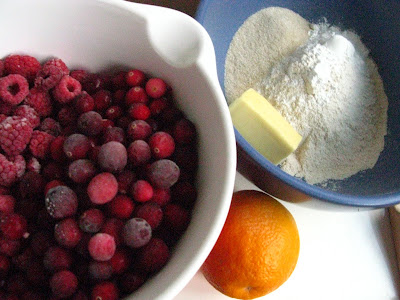 I found whole-wheat pastry flour from Dunbar Farms in Southern Oregon where I visited last summer and learned about grains, beans and wine in that region. It's food with a story, I know, but I love that I know exactly where the ingredients come from, and it's even better when I know the farmer who produced it. I also had a partially filled bag of Nash's Whole-Wheat Pastry Flour. I've mentioned in previous blog entires that Nash's flour is so sweet and tasty.

I didn't totally thaw the raspberries from Rent's Due Ranch, and it doesn't really matter because the berries thaw as the sauce bubbles and cooks.

2.Combine the milk and lemon juice in a small bowl and set aside. In a medium-size mixing bowl combine the flour, sugar, baking powder and soda, salt and orange zest. Mix well, making sure there are no small lumps of baking soda. Cut in the butter until the mixture has a mealy consistency. Add the milk and lemon juice and stir until a fairly thick but still sticky batter forms.

3. Drop the batter from a heaping teaspoon onto the simmering fruit, going around the outside of the pan until you reach the middle, covering almost all of the fruit.

4. Cover and simmer until the dumplings are done, about 40 minutes. Serve in individual dishes with the simmering fruit ladled over the dumplings. 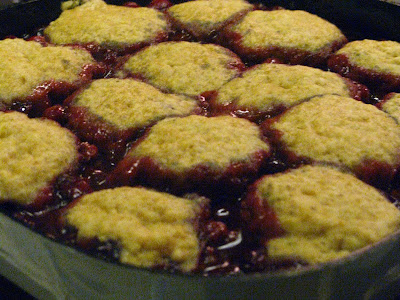 This dessert is best eaten hot with a generous scoop of ice cream, coconut sorbet, or whipped cream. This recipe is rated 4 PAWS UP. 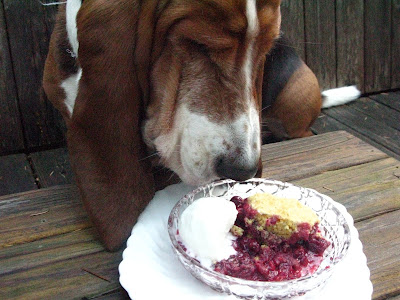 Posted by Debra Daniels-Zeller at 9:39 AM

Email ThisBlogThis!Share to TwitterShare to FacebookShare to Pinterest
Labels: Recipes

Your slump looks so delicious. And a good idea to use an electric skillet. Are you going to bring ice cream, too? Libraries are a treasure, and this one sounds like they know how to reach out to the food community.

Hey Kathy, as you know, cooking events have all kinds of challenges. It's kind of fun coming up with recipes that will work for unique events. Maybe someday we'll write a book about it.