I’ve been on a baking binge, and my scale has been shouting for me to stop. And I would, but I’m compelled to use Nash’s Soft Winter Wheat Flour that I bought at the market. I’m investigating this local flour while it’s in season, but it may be just an excuse for holiday baking long after the holidays have ended.

Nash's flour is available at winter farmers’ markets in Seattle—University District (Saturdays), Ballard and West Seattle (Sundays). Look for four pound bags, which at first can seem daunting because not everyone knows exactly how many pounds they use per month, and it only has a 3-month shelf-life in the freezer.

Also, one bag costs $6.00. I was sure the price was on the high side until I checked the bulk bins at PCC Natural Markets and got sticker shock there too. Whole-wheat flour has leaped up to $1.15 a pound.


Four pounds of flour translates into

Also, since Nash's flour is ground the day before it is sold, it contains more moisture than, say, King Authur’s flour. I had a hunch Nash's flour was heavier and had less gluten and my suspicions were confirmed when I took my sweet potato biscuits from the oven.

They looked more like puffy pancakes. Lucky for me that Finn acts as if every recipe was a winner, I caught caught him quietly wagging his tail, gazing at the biscuits (above).

Lemon-Pecan Biscotti was next and I added an additional cup of flour to the mix, but the two rolls flattened and flowed together when baked, instead of rising and standing alone. I lifted the twice-baked biscotti rolls from the baking sheet to cool. They were fragile and crispy and I knew slicing them wouldn’t be easy.

Many of the cookies crumbled. The crumbs can be used to top oatmeal, sprinkled over fresh fruit or coconut sorbet, or to make a cookie piecrust. A few biscotti burned and Finn’s eyes seemed to light up when I mentioned it. Maybe he’ll join me on a diet after this. (Fat chance.) 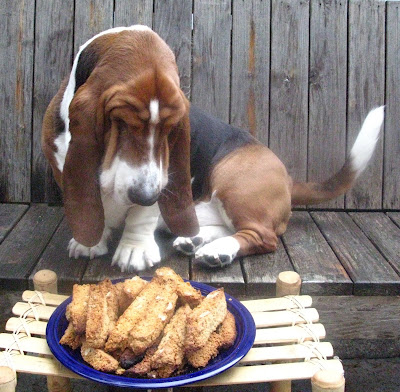 A piecrust was next on my baking agenda. While I made the biscotti, I put one together for a quiche, using an old Sunset Favorite Recipes book. The recipe listed 1 1/2 cups flour, so I increased that measurement to 2 cups. I was afraid with so little gluten, the crust might fall apart, but this crust was beautiful and the sweet fresh wheat flavor spurred me on.

I’d given a few cups of the flour to a number of people to see how other bakers experience this freshly ground flour. My friend Molly phoned and said, “You can really taste this flour. My muffins were amazing. I’ve saved you one.”

A cashier at PCC Markets used a few cups for a basic yeasted bread recipe said the flavor was fantastic, but the bread was slightly dense. (I was surprised she’d chosen a yeasted bread recipe and it turned out, so all I can say is try it and see for yourself.) Another friend phoned and said since tasting this flour she'd wondered if the ground flour in stores was all old flour. If you want to taste the fresh local difference yourself. In the meantime, these are my recommendations for using this local soft winter wheat:

· Store it in the freezer for a maximum of 3 months.
· Focus on quick breads, cookies, cakes, and pie crust recipes
· Add about 1/3 cmore flour to your recipe
· Add twice the amount of baking powder for a better rise

Molly and I are chipping in for another bag of flour, and I’m already considering another recipe and thinking about other baker friends who might like to try this local treasure.
Posted by Debra Daniels-Zeller at 7:52 PM