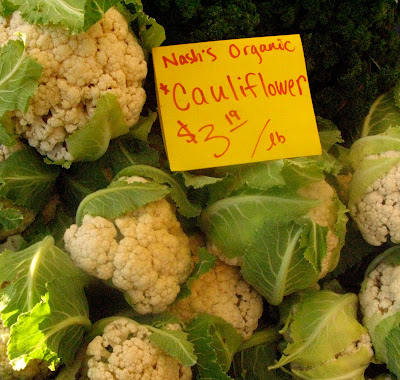 When my brother from Rhode Island sent me a favorite vegetable recipe called Cauliflower Power, I'd said that I didn’t usually see cauliflower in the Pacific Northwest until summer. I’d forgotten all about Nash’s early spring cauliflower.

By the way, in a post about cauliflower last summer, I referred to cauliflower as a mutant flower. But former University of Washington botany professor Ed Haskins told me cauliflower is technically a mutant floral head (with multiple blossoms). However, any way you want to think about cauliflower, imagine my surprise when I spotted these beautiful specimens at Nash’s Organic Produce at the market--I couldn’t contain my excitement.

“It’s over-wintered,” Kia said. That means the plants grow slowly during winter and come spring, with the warmth of the sun, they mature. I bought more than I needed to make my brother’s recipe.

My kitchen assistant, Finn, would love to sample the goods, so after he inspected the ingredients, I got ready to make the recipe.

I had everything except:
Anchovies
Pine nuts
Golden raisins

First off, the anchovies had to go. Someone at Nash’s had suggested frying capers to substitute for anchovies. I’d just add a few more to the mix. As for the pine nuts, I don’t buy edible products from China, so they, too, were out. Also, no golden raisins lurking in the pantry, but I had a great idea for a substitution—dehydrated North Star cherries that I’d gotten fresh from Grouse Mountain Farm near Chelan.
I mentioned my brilliant cherry idea to Tom (Mr. Conventional Palate) and you should have seen his eyes go wide and jaw drop as if I’d said I was putting rabbit turds into the mix. I swear he was just about to say, “You can’t be serious,” so I quickly offered to put the cherries in my serving.

“No, no, that’s okay,” Mr. Conventional Palate, said trying to look to stifle his incredulity. “I’ll try it.” An aura of suspicion hung around his words.

I just have to say one more thing before I give you the recipe. I’d never considered cauliflower and pasta together in a recipe. The white on white—it needed some color for me beyond the red pepper flakes. So along with the cherries, I’d add some of Willie Green’s organic spinach—one of my favorites at the market right now.
Here’s the recipe:
Cauliflower Power

This recipe appears to have originated with Martha Stewart, but have to say my version with dried cherries is simply amazing. It has just the perfect tang to make me want more. Here are the original ingredients in case you’re inclined to follow a recipe as it’s written. To plump the raisins or cherries: pour 1/2 cup warm water over them for 30 minutes to an hour, then drain and use in recipe. Use a skillet with a lid because you need the pan a few times in this recipe. My substitutions follow the listed ingredients.

1. Fill a large pot with water, bring to a boil, add a teaspoon of salt, stir in the farfalle and cook on low boil until al dente. Drain and place a lid over the pasta until vegetables are done.

2. Heat a medium-large (12-inch) saucepan. Add olive oil and garlic. When the garlic has softened and lightly browned, add 1 tablespoon capers (if your aren’t adding anchovies.) Stir and cook for 1 minute. Add cauliflower and red pepper flakes. Continue to cook on medium. Stir frequently; the cauliflower will absorb most of the oil fairly quickly. Add anchovies here, if you want and as you cook they will break up and dissolve. When the pan begins to look dry, add the remaining capers.

3. Stir and add the white wine, turn up the heat and put the lid on for a few minutes, until cauliflower is fork tender. When the florets have softened, remove lid, and add pine nuts (if desired) and raisins (or cherries). Continue cooking until most of the liquid has evaporated.

4. Add the drained farfalle and gently fold in. Sprinkle spinach over all and cover for a minute or until spinach wilts. Place everything in a large bowl, mix gently. Sprinkle grated cheese over each serving.

“Really good. You certainly can’t tell there are cherries in this.”

That’s exactly what I liked best too.

Posted by Debra Daniels-Zeller at 11:41 AM